1. Atlas and the Waste Management Community

1. Atlas and the Waste Management Community

“Waste Atlas” (further mentioned as Atlas) is a web and mobile open-access map that visualizes solid waste management data from all over the world.

Atlas aims to provide free and easy access to waste management data and relevant documents for comparison and benchmarking purposes between countries,

information regarding the way waste is managed. Atlas is a crowd-sourcing tool being supported by distinguished organizations, scientists and professionals

from various countries. With the combination of scientific knowledge, special data mining software and multiple data resources, the data published in Atlas

becomes more and more reliable. And like the Wikipedia project, the more the organizations and scientists involved, the better data quality will be achieved.

We live in the era of the rapidly expanding web and mobile universe. The data quantities around us are more than we can manage and their acquisition

goes beyond any human brain. We hope that with Atlas we will help the users to transform oceans of data into meaningful information. Atlas is available in 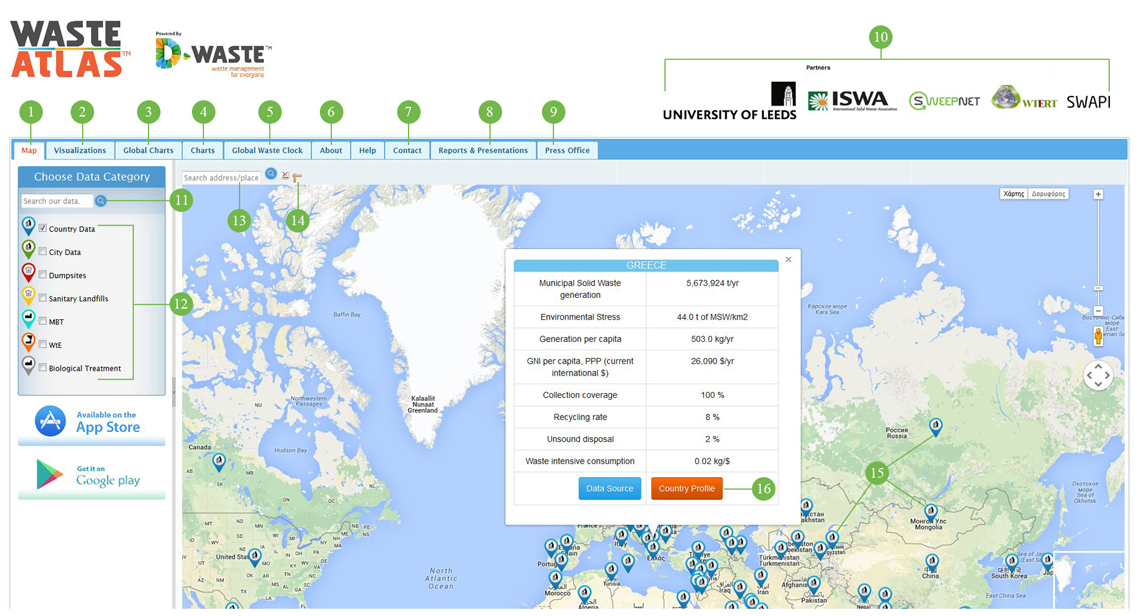 With Atlas you can generate custom charts according to what you are searching for. You can also print or export the chart as an image for your presentation.

There are two types of Charts:

·         Global Charts, that are outputs of Atlas database and they are provided

·         Customized Charts. Firstly you have to select the type and the specific data that you would like to compare.

Then you can sort alphabetically or choose the 20 with the highest or lowest value.

Access to improved sanitation facilities refers to the percentage of the population with at least adequate access to excreta disposal facilities that can effectively prevent human, animal, and insect contact with excreta. Improved facilities range from simple but protected pit latrines to flush toilets with a sewerage connection. To be effective, facilities must be correctly constructed and properly maintained.

Access to an improved water source refers to the percentage of the population with reasonable access to an adequate amount of water from an improved source, such as a household connection, public standpipe, borehole, protected well or spring, and rainwater collection. Unimproved sources include vendors, tanker trucks, and unprotected wells and springs. Reasonable access is defined as the availability of at least 20 liters a person a day from a source within one kilometer of the dwelling.

The amount of Municipal Solid Waste (MSW) collected as a proportion of total MSW generated.

The amount of the municipal solid waste generated in a country divided by country's area, expressed in tons per square kilometer (tons/km2)

GDP per capita is gross domestic product divided by midyear population. GDP is the sum of gross value added by all resident producers in the economy plus any product taxes and minus any subsidies not included in the value of the products. It is calculated without making deductions for depreciation of fabricated assets or for depletion and degradation of natural resources. Data are in current U.S. dollars

The percentage of the organic fraction in the country's waste composition

The percentage of the plastic fraction in the country's waste composition

Population density is midyear population divided by land area in square kilometers. Population is based on the de facto definition of population, which counts all residents regardless of legal status or citizenship--except for refugees not permanently settled in the country of asylum, who are generally considered part of the population of their country of origin. Land area is a country's total area, excluding area under inland water bodies, national claims to continental shelf, and exclusive economic zones. In most cases the definition of inland water bodies includes major rivers and lakes.

Population below $2 a day is the percentage of the population living on less than $2.00 a day at 2005 international prices. As a result of revisions in PPP exchange rates, poverty rates for individual countries cannot be compared with poverty rates reported in earlier editions.

The amount of Municipal Solid Waste (MSW) recycled as a proportion of total MSW generated.

The percentage of total Municipal Solid Waste (MSW) generated that is disposed or burnt in controlled and uncontrolled dumpsites.

The amount of Municipal Solid Waste generated in a country per dollar of household consumption expenditure.

The web application Waste Atlas is developed with open source tools. More specifically, Google Maps Api is used for the visualization, with custom CMS to be used for data entering. All Map backgrounds come from Google Maps.

General coding is made using:

PHP 5.1. and MySQL 5.5.2.For technical support you can communicate with our Technical department at: atlas.support@d-waste.com